But why would you want to do this?
First, you’re free to move around and not worry about wires. Wireless microphones also sound great because the mic is attached to you, 6-8 inches from your mouth. Plus, if you’re shooting videos on your own or you’re doing any kind of run-and-gun style reporting or videos, a wireless system that’s ready to go at a moment’s notice and that is reliable is a huge advantage.

What is this miracle of a DIY wireless microphone?
It’s quite simply an Edutige ETM-006 omnidirectional lavalier microphone plugged into a Zoom H1 digital voice recorder. That’s it!!??? Well,

What the heck is so great about the ETM-006 and the Zoom H1?
First of all, the ETM-006 produces high quality audio and it’s packaged in a sturdy metal body with a 4.3ft long cable. That cable length makes it perfect to go with a Zoom H1, or any digital voice recorder you choose, so you can attach the mic and put the H1 in your jacket pocket, on your belt, or in your back pocket 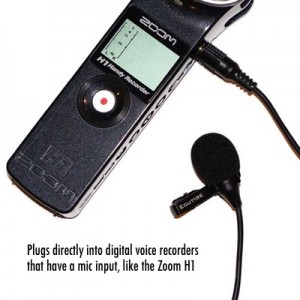 The Zoom H1 is what I recommend because it fits in your pocket, is easy to use, has a line in jack for an external microphone, and it produces great quality audio for only $100 as of this writing.

How to make a DIY wireless microphone using an ETM-006 and a Zoom H1
First… All you have to do is plug the ETM-006 into the Zoom H1 and you’re practically ready to go. You just need to clip the ETM-006 somewhere within 6-8 inches of the person’s mouth. It’s that easy.

Second… Manually adjust the input volume so the volume peaks at about -12 decibels. With the ETM-006, that’s usually an input gain setting of between 20-25 on the Zoom H1, but that depends on how loud your subject is going to talk.

If you’re interviewing someone, you can ask them a few general questions and ask them to speak at a normal level.

If you’re in a situation where you don’t have time to set the Zoom H1’s input level, then use the H1’s Auto Level function. But ideally you’ll want to set the levels yourself because when there isn’t any sound, the H1 will increase the recording volume on its own, which can cause some noise to get into your recording. 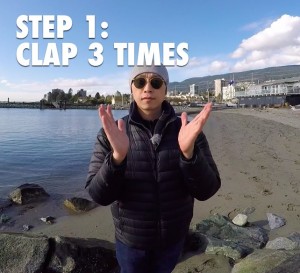 Then hit it and clap
Hit record on the Zoom H1 and your camera. Then put the Zoom H1 in a jacket pocket, in a case with a belt clip, or in your back pocket. Finally, clap three times. These claps are like a movie clapper and the audio spikes will be used to sync your audio. Now record your video and when you’re done, stop recording on both the H1 and your camera.

How to sync separate audio tracks
Now here’s the easy part… syncing the audio from the Zoom H1 with your camera’s audio. You might think this is hard, but it’s probably a 20 second process and even faster if your video editing software has a synchronize feature like Final Cut Pro X does. 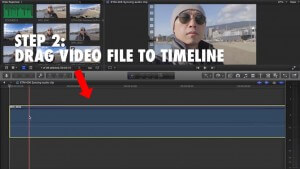 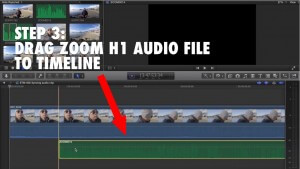 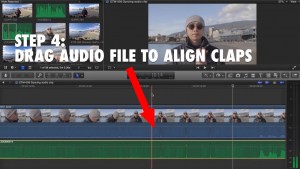 Find the three claps you made and move the audio file until the claps line up.

Play the file and move the audio track until your audio is perfectly aligned. 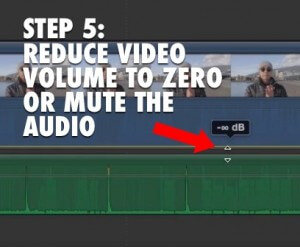 Finally, mute or reduce the volume from the camera’s audio so you’re left with the audio from the H1.

The three claps you made are important because they make it so easy to line up your audio tracks. One clap can work too, but three makes is super easy.

That’s how to make a DIY wireless microphone for your GoPro, iPhone, mirrorless or DSLR camera, or even a point and shoot camera with the Edutige ETM-006 and a Zoom H1 digital voice recorder… and all for only $153!

Hope that helps. Let me know if you have any questions.